I’m back with the story of how Alex and I met + got together! Before we continue, make sure you read the prologue first and then part 1 and part 2. Alex & I love how God wrote our love story. We’ve shared that story to many, and have been asked to share our wedding vows to youths learning about God-centered relationships. But I’ve struggled with writing about it because it is so very personal + sacred to me. Also, every time I’ve sat down to write this story, our marriage has come under attack and I’ve given up. But over the past year God has been challenging me to do it – let His work in our lives be a light to others. Because it’s not just about how God wrote our love story; it’s about how God came into the lives of two broken people and wrote something beautiful out of that mess… and how we get to live the story He’s still writing. So this is our story, the story of us.

It’s our 2nd year wedding anniversary tomorrow, so I thought it a good time to look back on how God has brought us this far. Ergo, a continuation of how God wrote our love story as follows!

Now where did we last end off? Ah yes… the moment Alex and I first bumped into each other, at the first conference the Lord told us both to attend that year, after about a year of deep heart work with God individually.

At that point, I was wrestling through many questions with God, and Alex was waiting for a major prophetic word from the Lord. Neither of us had a clue that God was writing our love story through it all. 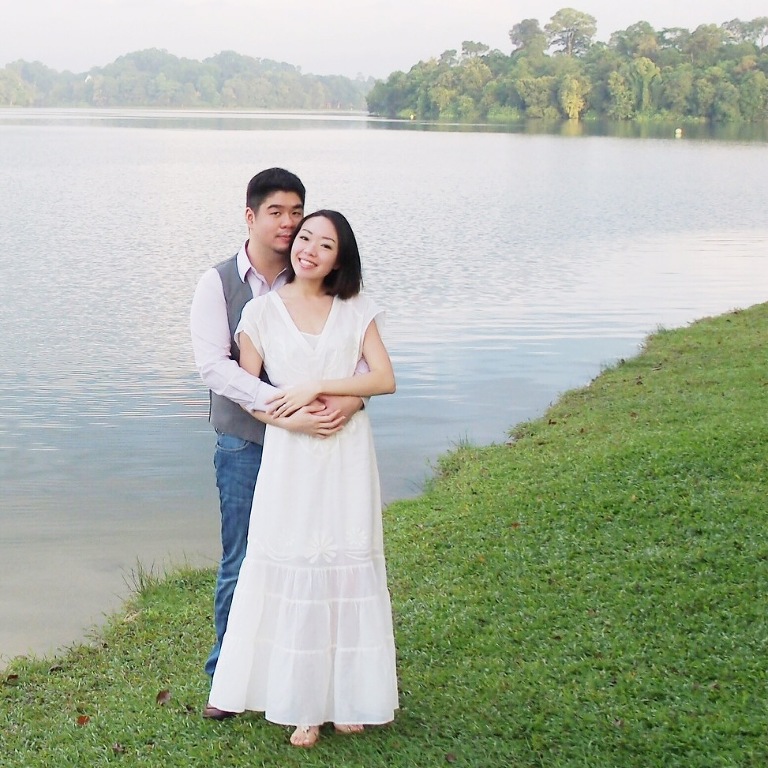 From day 1 of the conference, he knew James Goll had a prophetic word from the Lord for him. He waited all that first day, but nothing happened. The hosting pastor of that church wanted to call him over that day, but James Goll told him, “Not yet”. God has His perfect timing.

Alex waited all through the next day, and the next… and nothing happened.

Finally, it was the very last night of the conference. Alex, tired after the past few conference days of waking up early + sleeping late, was seated in the very first row of the auditorium… asleep. The head-thrown-back-mouth-agape kind of deep sleep.

It was also that moment that the Lord must’ve said, “Now!” because the next thing he knew, James Goll’s booming voice said, “Alexander!” and a hand came upon his blurry-eyed-just-waking-up head and then proceeded to deliver the biggest, most ultimate life prophecy he had ever received (and has ever received till this day).

It’s funny how God ambushed this eager young prophet-in-training, and chose the moment when he was most rested in the Lord, to deliver a life-defining prophecy about his call as a prophet who would raise up a prophetic army. It’s a pretty prophetic picture to me right there.

The conference ended without us officially meeting, but a few days after that, Alex had a prophetic dream in which he was introduced to, “The woman who will be your intercessor”.  About a year later when feelings for me began to be awakened in his heart, he began Facebook stalking me (come one boys, you know you do it) and was amazed by what he found – one of my photos from a few years back was exactly the same as the intercessor woman he’d met in his dream, right down to my long hair dressed in jeans + a pullover. Wow, God.

Life carried on as he sought God with increased fervor, and we crossed paths again a few weeks later at a gathering of creatives from across churches. Alex didn’t recognize me as the woman in his dream because I had short hair at that time (explained in part 2) and in the dream I had long hair. This time though, God made sure we’d get to speak to each other…

That first conference day after bumping into Alex’s nametag, I hurried back to my seat for the next session and went home that night full of thoughts about all I’d heard from the Lord that day. I didn’t give that name “Alexander Wiraatmaja” a second thought, but God had it all set up.

Late that night as I was sleeping, He woke me up as He was prone to do during that season of my life. When He wakes me up in the middle of the night, it’s either because He wants me to wait on Him, or to pray. That night, He woke me up and told me to pray. I said, “Yes Lord, what/who should I pray for?” and immediately that nametag with Alex’s name flashed in my mind. The vision was so strong, clear, and incessant, there was no way I could misunderstand the Lord message. So, I began to pray for this stranger.

All the info I had to go by was his name, there wasn’t anything else I knew about him. But as I prayed in the spirit for this person Alexander Wiraatmaja, the Lord began to show me many things about his life + his destiny. He showed me the meaning of Alex’s name, the call on his life, and many other things that left me amazed – I almost couldn’t believe how perfectly matched were our journeys, calling, and purposes God was revealing to each of us.

At that point, I wasn’t 100% sure if what I’d sensed for Alex in prayer was accurate. But God will always send confirmation to back up His word. On the last night of the conference, I got to hear everything that James Goll prophesied over Alex because it was right in the middle of the night session + captured on camera for the entire audience to see + hear as he prophesied on the mic. God had set it up perfectly.

I think my jaw dropped closer and closer to the ground as the prophecy went on – these were the exact things that the Lord had showed me about Alex a couple nights before, and these were also things the Lord had been speaking to me about my own destiny.

I didn’t quite know what to make of it, and we ended that conference without officially meeting. I didn’t feel the need to go up to Alex and tell him that the Lord had spoken to me about him a few nights ago. I thought that, perhaps, all God had wanted was for me to intercede for him just that one night. I knew that if God wanted us to become friends, He would make it happen without my help.

A week later, the Lord told me to attend the last night of another conference that was going down in the city, so I did. As usual, I was seated right at the back, and lo and behold, there was Alex seated right in the front. And as usual, we both left the conference without having officially met.

Then, a couple weeks later, the Lord again told me to go to a gathering of creatives. I didn’t want to go because I felt like my area of calling had nothing to do with the arts or music, but the Lord was insistent that I go, so I went.

I was late to the meeting – again. So I came in and stayed at the back – again. As the session continued, I saw a by-now-familiar back seated way out in the front – again. Alex.

By this 3rd time, I was slightly freaking out on the inside. There’s such a thing as too many coincidences, right? What in the world was going on here? I was so freaked out, I would’ve left this 3rd time without speaking to him – again. But this time, God had other plans.