Selfless in A Selfie Generation

Let me just say, right off the bat, that I love Social Media and could not be further from a hater. I LOVE sharing God’s word on all the media platforms. I feel like Instagram + the internet are some of the places that the Lord has called me to be a missionary. My businesses are all online and I literally cannot choose to not engage in social media, nor do I want to. I wholeheartedly believe that it is a powerful tool in the hand of God. It’s an incredible resource the Lord’s given us to impact society, and we are called to steward it well. I love this beautiful gift + I will do all I can to take it back for the Kingdom of light.

So if you’re feeling bendy or defensive or worried like, “Is she going to tell us to quit social media,” we can all take a deep breath. I’m not going there.

Where I am going is this: God doesn’t want to take us out of our generation, but He does want to partner with us to bring Heaven’s reformation into it.

God created the earth and gave Adam jurisdiction over it. Adam abdicated, handing reins over to the devil. The devil corrupted, distorted, and injured our world. God could’ve crushed the earth and tossed it in the can like ruined paper, but He didn’t. He sent Jesus and Holy Spirit to take back that jurisdiction for mankind so we could begin to rebuild all that had been lost in Eden. And I believe that’s what God wants to do with the Media.

I believe there is a clarion call in this generation for the vast territory of Media. I believe God wants us to take up Adam’s abdicated seat which Jesus won back for us. And I believe He has a mission for us to begin to rebuild. What was once stolen and corrupted, He wants us to take back and reinstate to God’s designed purpose.

I believe there is a way back for the selfies. A way back to the pure shimmering power of Eden. 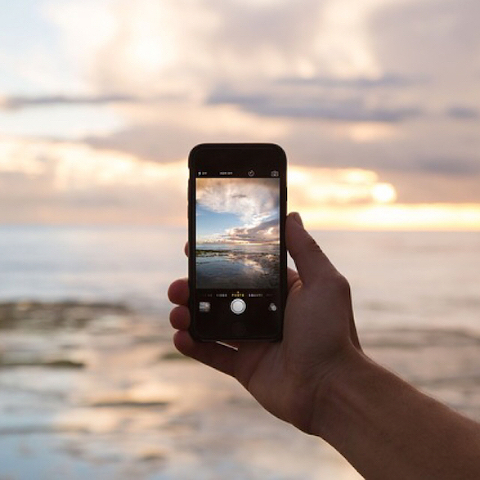 Yes, there is a lot of narcissism + focus on self that goes around on social media. People are even looking into the scientific ways that using these platforms trigger our brain’s dopamine system. Dopamine, once referred to as “the Kim Kardashian of neurotransmitters“, is linked to reward-motivated behaviors and addiction. The notifications of likes, comments, and follows, serve as “reward cues” that condition us to expect a rewarding experience everytime we hear that ping or feel our phones vibrate. To put it more bluntly, receiving a social media notification lights up the same area of the brain as taking heroin or cocaine.

So definitely, we do need to be on the look out for that.

But I feel like we literally don’t have time to waste debating the merits or liabilities of social media, and we definitely should not be chewing over ways to deliver ourselves from it (the media was given by God, it’s here to stay, deal with it) because we have a huge commissioning on our hands to bring the culture of heaven into this deeply embedded earthly culture.

I’ve been thinking about this a lot over the past few years, and God keeps bringing me back around to the words: SELFLESS IN A SELFIE GENERATION.

The perfect antidote to the counterfeit is the original. Simply put, we don’t counter the narcissism or self-absorbed entitlement that seems to characterize most in this selfie generation by criticism or boycotting in the hopes that if we bash/ignore it long enough it’ll just disappear. No. We bring seflessness into the mix and watch as light manducates darkness.

There is a move of God that is calling forth His sons and daughters to take their place of royal authority with selflessness. A generation that would fast, pray, and seek Him on behalf of their spheres of influence, small or large.

God is calling His children to take their place of royal authority with holy selflessness; to fast, pray, and seek Him on behalf of others.

God is seeking a generation of laid down lovers who would say, “To have my name known by many, or my soul known by God, I’d choose the second a million times over.” He is calling for a people who would fight the real fight, not put up a show in the limelight. He wants us to build the deep unseen wells, not broken cisterns that cannot hold water. To do the work that is seen by Him – whether it’s to rise up or kneel down – not what is seen by man yet unacknowledged by Him. A people set free from this addiction – addiction for applause, approval, focus on self – and living in wild abandon for the audience of one.

This selflessness is also pretty much encapsulated in Romans 12-15. Serving others with a joyful heart. Building others up by doing what’s good for them. Putting others before ourselves. Honor. Generosity. Mercy.

There’s a whole depth to explore when it comes to being selfless, but we won’t go into there here because then this would turn into a book. This article was meant to be a clarion call, a sounding of the bells to say, “Awaken, awaken. Rise up, you chosen generation. We put to death selfish ambition + narcissism in Jesus’ name. Let selfless faith come forth!”

So can I encourage you to dig deeper into what being selfless looks like for you specifically today? Will you take time to hear what the Lord is speaking + convicting your heart in this regard? Maybe let’s stop “fasting” from social media and instead? We start circumcising our hearts daily, so that these God-given tools no longer become our masters but our servants. Servants that serve to bring God glory.