These last couple of months, we have been going from one level to the next in the spirit. An acceleration like no other I’ve experienced before.

It all began in July.

I was worshiping God one day when a huge angel appeared at my right side.

He was dressed in white with a gold sash from shoulder to hip, and he carried a huge sword. I thought he was a warrior angel because of his huge size + the sword at his side, but I’d never seen warrior angels wearing gold sashes before. His demeanor was more like a ministering angel.

As I continued worshiping God, he came forward and poured a huge bowl of anointing oil over me. It flowed like it would never end, it was like a strong heady waterfall filling all my senses.

I asked the Lord, “Why did you send an angel with both a sword and oil? What does this mean?”

He was about to release His JOY to us in a way that would shatter my carefully labelled “God boxes” and comfort zone. He was going to release the:

The Lord told me to go to Isaiah 61, where He showed me that the promise of this scripture isn’t just one of comfort. It’s also a militant one:

“VENGEANCE of the Lord..”

He told me that He was sending us the ministering angel for BOTH healing hearts + fighting spiritual battles, and told me to proclaim that over each person under the covering of the ministry.

The following is an account of the things that began happening after that declaration. 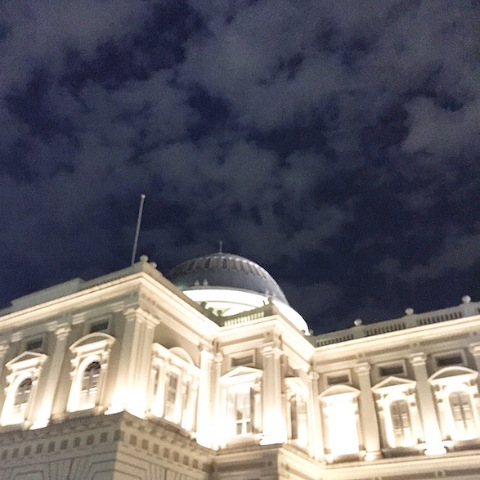 One of the girls in our community, Yin, began to feel drunk on her way to our Prophetic Equipping class. Holy Spirit immediately spoke to my spirit that He was going to begin to release JOY as He’d promised, and He was going to do it through her.

Holy Spirit had chosen this dear sister, and without knowing what hit her she became drunk in the spirit. At the end of class, we gathered in a circle to play spiritual Catchball (photos of that here), a game that was invented on-the-spot as Holy Spirit inspired.

What we do in spiritual Catchball is this: We wait on the Lord for what He wants to be released (for example, we got things like finances, joy, a hunger for the word, being able to see angels, etc., and released those one at a time). Those who feel they’re meant to “catch” that particular “ball” go in the middle, and the ones on the outside who have that particular gift/unction will pray and release it over those in the middle. An individual can catch as many balls as he/she wants.

One of the “balls” was Joy. Yin began to release it by faith, although she wasn’t quite sure what was happening within her – because the things that happen in the spiritual realm are caught first in our spirit man, oftentimes before our logical mind can understand it – and all of a sudden we began to break out in holy laughter.

Alex fell so hard under the power of God that his head made a loud cracking sound when it hit the floor, but he said it didn’t hurt and there were no bumps on his head afterwards. His body was literally almost levitating off the ground as he lay there and God’s power coursed through him.

That was just the start…

Another “ball” was for those who wanted to see in the heavenly realm and see angels. As we prayed, one of the guys, Paul, saw “…an angel with big wings, wearing white robe with a golden belt, with hair and face that looks like Michelangelo’s David standing in the midst of the clouds near a hole (portal) that overlooked earth. And then I saw this angel tipping a huge vase and pouring out something.. I didn’t know what was poured out though.. But I remember we were praying for the angels to pour out gladness/joy.. So! I translated that into liquid gold.. Oh yes.. My paper was a little bit too small, so the wings are quite a bit smaller here.”

Drawing of the angel by Paul Leslie Lu 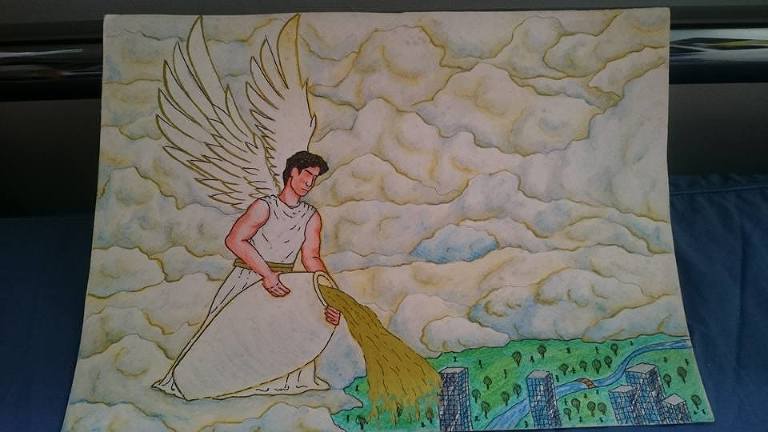 This was the same angel that had appeared to me at the beginning to signal the dawning of this new season!

At our CreateCollective worship night, people began to break out in holy laughter again and some started to see this same angel.

A dear sister, Audrey, shared that she saw the angel pouring out the oil of gladness and it was like there was an open heaven (similar to the portal that Leslie saw) and a waterfall of that oil pouring down on all who would come and stand beneath it. So we responded and stood under that waterfall, and it was wonderful time in His presence.

A few of us ended up praying at 5am in the morning (must be a God thing!) and sensed that God wanted to release joy to break-through suicide and depression at that night’s CreateCollective Worship Night.

He came through, and so many of us left feeling so ministered to by His presence. One of the attendees described it like this, “I was so blessed last night. I felt like the one sheep that the shepherd left the 99 for when. Papa God is so so good“

So much more is to come in the coming months.

The angel that the Lord sent wasn’t just for healing hearts, but, the Lord told me, was for a militant purpose too! The sword that the angel carried was a grace for us to tear down the works of the enemy, defend against his attacks, and crush him in Jesus’ name.

I had a series of dreams, through which I was literally doing spiritual warfare whilst asleep. As I fought the various attacks of the enemy, the Lord would coach me from my right side. He gave me different scriptures to defeat different demons, and different strategies against the different principalities — yes, we need to be led by His Spirit in spiritual warfare!

For example, in one of the dreams, I was calling down fire and using the sword to fight the enemy, but that only seemed to make him stronger. Then my Coach, the Lord, told me that for this one I had to fight with water. Water meant repentance (Matthew 3:11) and His forgiveness that would wash us clean if we repented (1 John 1:9). I did that, and it worked! Not only did He wash me clean of my sins, but He washed me clean from the demonic disturbance. The water just flushed that enemy away!

In another dream I was up against the Jezebelic spirit. She’s a sly manipulator and very wily, and I couldn’t catch her until my Coach told me to use Romans 16:20, “The God of peace will soon crush Satan under your feet.”  I used that scripture and caught her, wrestled her to the ground, and literally crushed her till she was just a pile of bones. The rhema word of God is a powerful weapon in spiritual warfare!

The Isaiah 61 angel that appeared in my living room in July was heralding a new season, and the Lord is literally giving us weapons for warfare! It’s not enough to have the tools for healing; we must also have weapons to set the prisoners free! 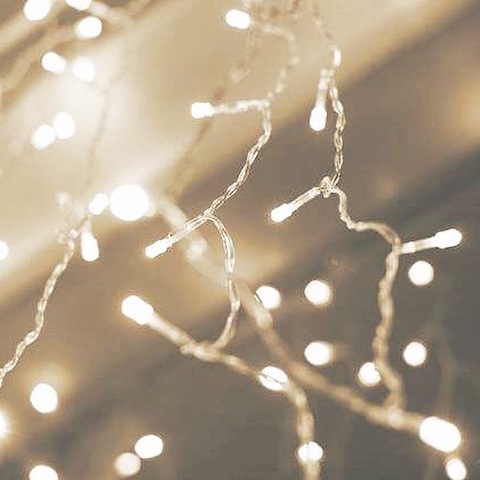 On the last night of August, I had a dream in which a wise old man (Holy Spirit) gave me some major prophecies for the world in this season. It’s not a coincidence that it happened right before we stepped into September. This is going to be a month of new beginnings, greater acceleration, and even MORE of His supernatural activity.

Breakthrough upon breakthrough has been coming and I’m contending for more!

Show Hide 7 comments
A Word In Season: He Is Releasing His Joy! »
« A Word to the Prophets and the Prophetic People of God