Godly Wives: In Sickness & In Health… And The Power of Hope (By Larissa Murphy)

A guest post. Godly Wives is a space where women talk candidly and honestly about real issues in marriage. 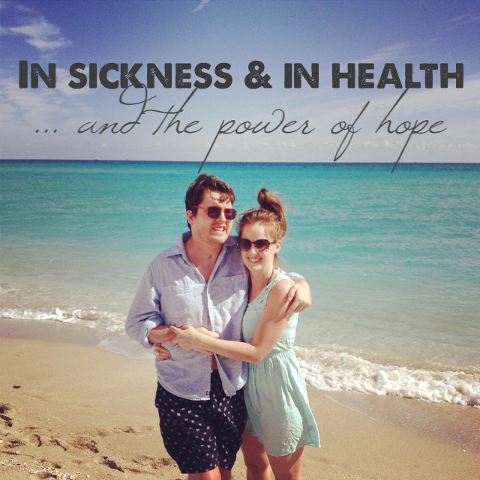 Seven years ago, I started dating my best friend Ian in college. We had been “going out” for awhile and he’d finally asked me to date him. We were completely in love and spent every waking moment with each other.

Then on September 30, 2006, our lives changed. Ian’s station wagon slammed underneath an oncoming SUV on his way to work, causing traumatic injury to his brain.

Up until that moment, we had lives filled with independence and hope that our futures would turn out exactly as we were planning them. We had hopes to get married and move to the Washington metro area to pursue careers. We had hopes to someday have a family and just spend our lives enjoying each other… in health. Then came this accident – totally unexpected and completely devastating.

Since September 30, we’ve been in a process of battling through hope and learning what it means to have hope in the face of shunts, ventilators, therapists who have lost hope, and an entirely messy disabled marriage.

That night, I prayed for Ian by his ICU bed and asked him to come back to me. I kissed his open cheek and pulled myself away from his bed as the nurses came in to help him.  He had suffered a traumatic brain injury and when I kissed him that night, he had only been out of surgery for a few hours. The next three days were spent hosting visitors and trying to get time alone with Ian whenever I could, which was rare. On Monday (I think, it’s all so blurry), a doctor called all of us in to say that Ian was failing four out of five brain activity tests. That’s when we started the phone calls to more friends to tell them that if they wanted to see Ian, they needed to visit right away. His parents, Steve and Mary, contacted the funeral home. His extended family went back to Philadelphia, thinking they would be back on the weekend for the funeral.

But heaven wasn’t ready for Ian. Overnight, God allowed his brain to start responding again. Something started happening and a doctor we had never seen before came in and told us that Ian was over the hump. We didn’t know that there was a hump to get over. But getting over this hump meant that maybe we would have more time with Ian. That was the first glimpse of hope we had received, but it would continue to be a long, long road. Ian spent seven weeks in the ICU and then was transferred to a step-down rehab unit for a few weeks. He eventually ended up in a rehab institute where he spent the next five months until he came home. God healed him in many ways, and there were several anticipated surgeries that we didn’t have to deal with because God healed him first. We tried to have someone with him in the hospital every day, and my professors graciously let me take one day off a week. I finished up college that December and then waited to get a job so that I could keep him company more in the rehab center.

From the time he moved home, it took another two and a half years before he would speak again. He moved from communicating with his toes, to blinking, and then his hand. When he did start speaking, it wasn’t crystal clear like it had been before. It was labored and required hours and hours of speech therapy. It is still labored and requires hours and hours of speech therapy.

In the midst of it all, I couldn’t give up hope that someday maybe we could get married and have a life together. We had hoped for that before the accident, and I could not let that hope go because I loved him. It was going to be so hard, but we believed that God created marriage and God loved marriage and He would be bigger than our marriage. We believed that He would sustain us as he had for so long already, and that He would give us a future and a hope. We believed that we could bring Him more glory together than apart. Romans 8:28 would continue to guide us.

Romans 8:28 “And we know that for those who love God all things work together for good, for those who are called according to His purpose.”

That December of 2009, Ian proposed to me at a rental condo in the mountains. We married the following August on the 28th. Eight Twenty Eight.

On the hardest days, the only thing that makes sense is that Jesus saved me. It’s the only thing I can keep straight in my head. That is a hope – the hope of heaven. In the midst of suffering, that is somehow very clear for me.

But then there’s this other hope. It’s the hope of what can happen between now and heaven.

Hope is a knowledge in my head that I can keep moving forward and that the opposite of moving forward is despairing, a state of being that would destroy me and my husband and my marriage.

How do I keep hope alive?

I have not felt like hoping every day. The past two weeks have been particularly discouraging and somewhat hope-less. The battle for this hope grates against my flesh because I don’t always see hope when I look at my life. When I come home and Ian is laying in bed, worn out, ready for a nap, and I’m too tired to help him get out of bed and into the car to go on a date, I don’t feel that hope.

We have found that the more you dig into love, the more hope will prosper in your heart. Love, to us, is the single most powerful factor in sustaining life and hope. The world is moved by love and through it, people are empowered to keep going, keep moving, keep fighting. Your love for your disabled child, student, brother, wife truly changes them. Your love for your children, your boss, your mother-in-law, your daughter-in-law, changes relationships and futures. Even though you may not see it, the love that you demonstrate through words and actions are propelling your loved ones to keep going. Whether or not they can communicate it, your love for them is showing them that they are worth loving and is improving their mental and physical health.

I asked Ian how he thinks his progress would be different if he didn’t have anyone walking through it beside him, loving him, hugging him. He said, “I would be worse off because the reward at the end is with me every day, Larissa. Affection lets me know that there is something worth living for.”

Gratefulness propels hope. A regular practice of gratitude reminds us  of how far hope has brought us. It cultivates a recognition of the small mercies in life which allow us to incrementally see all of the events that have held us to this day. Ian is one of the most grateful people that I know, and from him I derive a significant amount of hope.

Because when I’m focused on the gifts that God has given, I am expectant and hopeful that they will continue. Ian says that gratefulness propels him toward heaven by making him grateful for what’s to come.

One of the greatest gifts God has given us is hope and purpose beyond our circumstances. 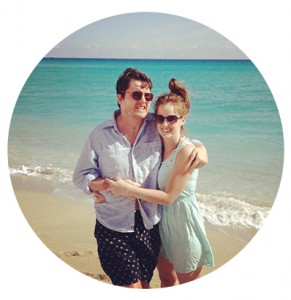 Larissa Murphy is wife to her best friend, Ian. In September of 2006, on his way to work to earn money for a ring, Ian’s car slammed under an SUV.  Since then, Larissa and Ian, both 27, have shared their story on their blog. Larissa, the main author, has chronicled their adventure of learning God’s character and sovereignty through a young, disabled life. Each day while Ian is with his caregiver, Larissa works full time at a local bank as a Marketing Representative. The Murphys are currently working on their ﬁrst book which is scheduled to be released in 2014.